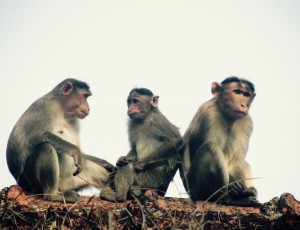 A family of monkeys, the male on the right was fiercely protective of his little family, Hariharapurnam, India 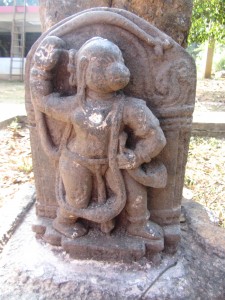 I’m a bit worried by the implications of the fire monkey year. A trickster has entered the consciousness of Asia, an agile fellow who can piss on us all from a great height and laughing, swing away on his strong arms. As a result of his strength and intelligence, the monkey is exploited as a mythic source of healing. Black-faced spider monkeys and brown or tufted capuchins are each used to treat many ailments. For example, in Bolivia, spider monkey body parts are used to cure snake bites, spider bites, fevers, coughs, colds, shoulder pain, sleeping problems and leishmaniasis (a parasite infestation caused by mayfly bites).

In India many people believe that eating the blood of macaques (Macaca assamensis and Macaca mulatta) treats asthma. Assamese macaques are eaten to cure rheumatism. Other monkeys or lorises have their bones or skulls ground up into powder administered with tea, or have their gall bladders ingested or blood or fat used as ointments. Not really so clever, these Asian beliefs and practices, as wild animals organs and parts are often vectors for disease.

The Great Western Medicine is above this sort of nonsense, I hope you can tell I am being sarcastic. In 1960 a scientist named Bernice Eddy discovered that rhesus monkey kidney cells used to make the Salk polio vaccine and the then experimental oral polio vaccines, could cause cancer when injected into lab animals. Later that year the cancer-causing virus in the rhesus monkey kidney cells was identified as SV40 or simian virus 40, the 40th monkey virus to be discovered.

At a conference in 1997, on SV-40 and human cancers held by the National Institutes of Health (NIH), there was no disagreement among both government and non-government scientists about these two facts. The only disagreement was whether SV40 was actually being identified in the cancerous tumors of children and adults alive today and, if it was, whether the monkey virus was in fact responsible for their cancer. Non-government scientists working in independent labs around the world said, “Yes.” But the scientists connected with the U.S. government said “No.”

The ancestors are acknowledged at the Chinese New Year, the first dark moon in the year is new year’s eve and the new moon’s crescent appearance, the next day, marks the beginning of the next year. A feast is prepared and paper symbols of wealth, gold, money, rich clothes, certificates, even watches are burnt in a fire outside for the ancestors in hell and where ever else they go, so that they have the spiritual means to live well. As we burnt the symbols of wealth the ancestors get to eat our laid out feast, then we all eat their ghostly leftovers.

It’s a family event, full of good humour, family ill will, suppressed feelings, easy conversation, strange withdrawals. I think I am describing a ritual like Christmas, and it is a bit like Christmas but all the dosh and goodies are sent via flame to the dead olds so they can get on with the afterlife and stop haunting us. A happy ghost means a happy home. Money is spent on food, symbols and paper, rather than plastic land fill for kiddies who will discard the toxic non biodegradable toys in a short time.

The first day of the year of the fire Monkey means a quiet day in Phnom Penh. Many schools have schedule a day off and many shops are closed, but the big retail centres are in full swing their eyes quickly turned from the retail opportunity of the Chinese New Year to Saint Valentines Day. The red hearts, cute cuddly bears, cards are all newly displayed amongst the red decorations of the New Year. It looks quite festive. I must admit I felt like barfing but I was curious as to how the changes in retail strategy, to sell, were turned around so quickly in a country so slow, in other ways, to change. It just goes to show you that the human mind is a profit exploiting machine. I’m not very optimistic about changing that, but I will be teaching a class on love on February 14th at 2:30pm, for pairs of people (bring a friend, relative or partner for free) at Nataraj, #52 Street 302 Phnom Penh. Come along if you’re in town we can meditate at the end of the class on the Buddhist concept of Metta, Loving Kindness and develop the skill of Ahimsa, the practice of compassion. 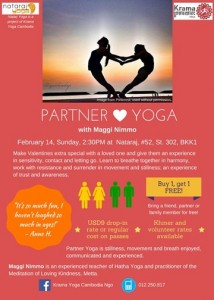